Manistee Blessings in a Backpack Delivers Food Despite Snow Days 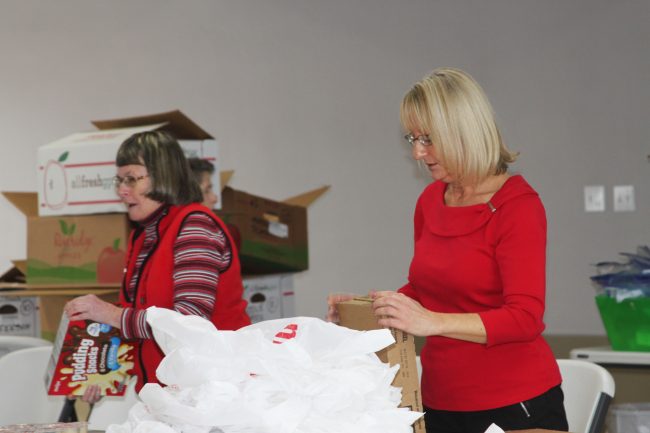 Although snows days have been accumulating for schools over the past few weeks, it has not stopped Manistee Blessings in a Backpack from delivering food to students.

Joyce Brenner, coordinator for Manistee Blessings in a Backpack, said the frequent snow days in late January and February have caused some issues, but mostly for those who volunteer.

On Thursday, volunteers gathered at the United Methodist Church in Manistee to help pack 96 bags for students in the program.

“It has worked out,” Brenner said. “It has impacted us who pack, but it has not effected the kids in getting their food.”

Blessings in a Backpack is a program that feeds children in need on the weekends, which is something that Brenner feels is necessary in this area.

“There really are no food pantries that are available on the weekends, that’s why this is so important,” she said.

The volunteers pack bags with nonperishable food items from Meijer every two weeks to send to schools. Students receive these items at the end of each week.

Six food items are contained in the bags including canned tuna, canned pasta, a pudding cup and a monthly bag of toiletries.

Typically volunteers pack bags on Wednesday, but snow days have thrown off that schedule.

“There’s a coordinator at the school and that person makes sure that they get their food every Thursday or Friday,” said Brenner. “Two weeks ago we had snow days, but we packed Friday morning (Feb. 1) and got it to them on time.

“(On Wednesday) we could not pack because there was no school, but they will get their food on Friday.”

The Blessings in a Backpack program has been around in Manistee for five years and has grown since then. Brenner said when they first started, they only had 17 students — all of which were deemed homeless.

With the weather causing delays for volunteers, Brenner said they have been working as quickly as possbile to get bags out on time.

“We’ve never had anything like this year,” she said. “We are on crunch-time, but we have time.”

Shelly VanVoorst, director of CASMAN Academy in Manistee, said the snow days likely had an impact on students who need free and reduced lunches, but this is not something that’s directly apparent.

“Kids do not come right out and tell us that there’s an impact but we can tell by attendance,” VanVoorst said. “Attendance is higher usually right after a break, and sometimes the visits to the pantry too.”

Right now, about 93 percent of students at CASMAN qualify for free and reduced lunches. CASMAN also has a food pantry for students in need, which they are able to access before, during or after school.

However, the pantry was closed for an extended period of time due to snow days. VanVoorst said volunteers were able to deliver food items to those who responded to a Facebook post on CASMAN’s page earlier this month.

The post stated on Jan. 30: “Since we have been having such cold and snowy weather some of you might not have been able to hit up the food pantry. If you get a message to the page by noon tomorrow (Jan. 31), someone from CASMAN will deliver a bag of food to you.”

VanVoorst said they were able to successfully deliver to those who responded.

“We did put a Facebook post out when we were closed for that week and we delivered to families that did respond,” she said.

Brenner anticipates that more students will be added to Blessings in a Backpack’s list by the end of the year.

“We started with 80 this year and we got some money to add some kids, so we are at 96 right now,” she said. “We may add again before the year is over.”

Click here to make a donation to help Blessings in a Backpack feed more kids on the weekends!