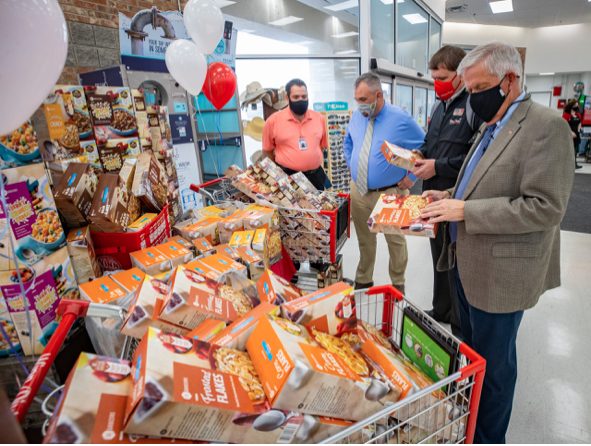 Story by Tony Mixon via The News Herald. Photos by Mike Fender.

Narvaez was the district manager for Chartwells in the Bay County area and helped lead the charge that served 3 million meals a year for students. To honor his memory, elementary schools in Bay County will compete to see which can collect the most cereal boxes by the end of the month.

Chartwells is a dining service that partners with BDS to feed the students of Bay County. One of its promises is to improve the well-being of students by providing nutritious meals. When schools closed down last March because of the COVID-19 pandemic, Chartwells continued to distribute food for free.

The cereal boxes will be donated to local food banks and Blessings in a Backpack. The winner of the challenge will become the site of a domino piece where engineering or STEM students in high school will design the course.

The challenge will be great for the community to contribute to local food banks and Blessings in a Backpack, but the domino part sticks out for BDS Superintendent Bill Husfelt.

“I think mathematically, the secondary kids are going to figure some diagram and they’re going to put them up around the school and do the domino thing,” Husfelt said. “I think you’re going to see thousands and thousands of cereal boxes. I think what we should do is a game to see how long it’ll take for them all to fall down.”

The challenge kicked off with Parker Elementary getting a jump with a donation of 212 boxes of cereal from the Winn-Dixie in Parker.

Parker Elementary Principal Chris Coan said Narvaez was an inspiration to his school when he was with Chartwells.

“Working in elementary schools to get kids everything they needed for food and nutrition was great,” Coan said. “He was always the first one to say ‘Yes, let me help, let me partner with you and the school.'”

Narvaez’s passing shocked BDS officials and it caught his Chartwells co-workers off guard. Javier Diaz, director of dining services for Chartwells, said it will take time for those within the Chartwells family to get over Narvaez’s death.

“Julio was just passionate about feeding the kids and what better way to honor Julio than doing an event that helps kids in the community,” Diaz said. “He was very involved with Panama City through their difficult times and he was always there to help.”

Secondary school students also can help by donating cereal boxes to the elementary schools. The school district also will work on building a tracker, so the community can see which school is leading and which ones are trailing.