Back To Home
Blessings in the News, Featured September 24, 2019 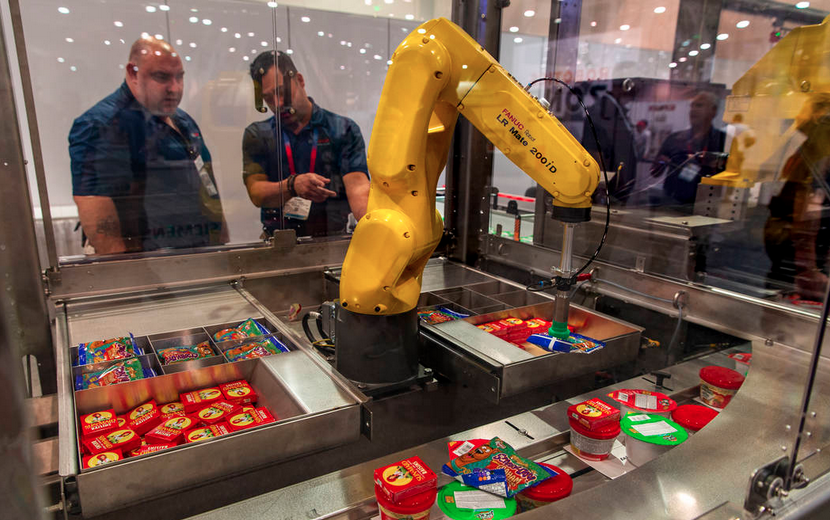 A robot from Fanuc packs bags of weekend food for Blessings in a Backpack.

Robots from Allied Technology and Universal Robots pack bags of weekend food for Blessings in a Backpack.

A robot from writes and folds a positive note card to include in a bag of food that with go home with a child on Friday for the weekend.

Allied Technology and Universal Robots are helping pack 6,000 bags of weekend food to go home with kids across the country.

The robotic efforts were part of “PACK for a Purpose: Robots Fighting Hunger,” an initiative using the latest robot and co-bot technologies to fill backpacks with food for schoolchildren in need, according to officials with PMMI, the Association for Packaging and Processing Technologies, which puts on the trade show.

PACK EXPO, underway at the Las Vegas Convention Center, expects to host more than 30,000 attendees over the three-day show, which features 2,000 exhibitors. It is held in Las Vegas every other year — alternating years with Chicago — and takes up over 900,000 net square feet.

“Our attendees are consumer packaged good companies from every industry,” she said. “They’re looking for something to package what they’re selling — either the materials or the machinery to do it.”

Automation is “huge” in the packaging industry, and it’s why the trade show operator decided to create a special space highlighting the latest robotic technology at its new Robotics Zone on the show floor, Thompson said.

“(Two) years ago, we had a drone exhibit with drone package delivery,” Thompson said. “You don’t want to do the same thing every year. You want to give people a reason to come.”

In addition to the food-packaging displays, robotic arms also played a piano and bowled, and attendees could try on a exoskelton suit designed to help pick up heavy items and perform assisted tasks.

Omron Automation Americas showcased its own technology inside the zone that let attendees play dice with its collaborative robot.

Collaborative robots should be seen as “a tool for someone to do things better” like having another arm or hand as opposed to replacing an employee’s job, said Keith Kersten, Omron marketing communications group manager.

“Automation can take on hazardous tasks,” he said. “So things that are dangerous that a person shouldn’t necessarily be doing, but it’s not going to hurt the machine such as (handling) hot or sharp items or repetitive motions where people could get carpal tunnel.”

But the Robotics Zone inside the convention center’s North Hall drew a crowd to watch robotic arms from companies such as Fanuc America Corp. and Yaskawa America, Inc. package bags of weekend food for the nonprofit Blessings in a Backpack.

PACK EXPO and Blessings in a Backpack

PMMI partnered with the Louisville, Kentucky-based nonprofit organization to showcase the latest automation technology while helping to feed children in need.

“Some 13 million children in the U.S. leave school on a Friday without knowing if they’ll have a meal over the weekend,” said Erin Kerr, chief development officer with Blessings in a Backpack.

“What we do is very simple,” Kerr said. “It costs $130 to feed a child every weekend of the school year. Once we secure the funding, we obtain the food, it’s packed into bags and the school discreetly distributes it to children on Friday before they leave school.”

The nonprofit has been able to provide more than 3 million children with “hunger-free weekends,” she said.

The robotic arms will package 6,000 bags of food for the organization during the three-day convention, including 2,000 that will be donated to Las Vegas schoolchildren with the remainder heading to Chicago and Reston, Virginia, Thompson said.

“We wanted to highlight some of the new technologies out there,” she said. “With automation increasing, we thought it was a great place to showcase it as well as help a good cause.”

A robot from Chicago Electric packs seven items, including food and a positive note card, into a bag for kids to take home for the weekend.