Inspired by his own childhood, this 22-year KFC veteran is helping hungry kids in Louisville

Back To Home
Blessings in the News, Featured, Partners September 25, 2019

Inspired by his own childhood, this 22-year KFC veteran is helping hungry kids in Louisville 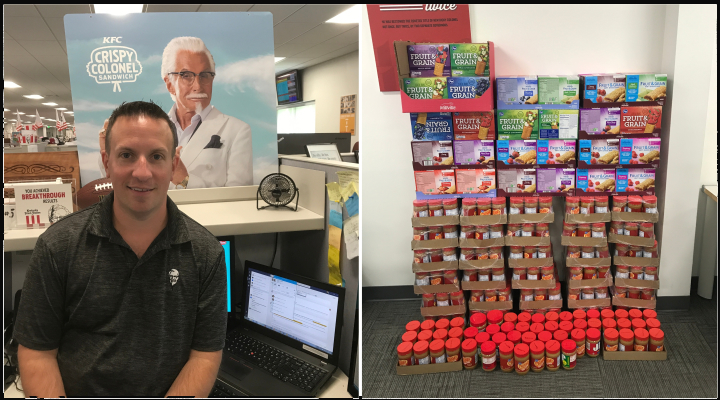 When Matt Blanton was 16, hungry for a paycheck and striving for independence, the couple who lived next door took him to KFC to apply for a job. When he was 17 and eager for hours, his manager gave him the opportunity to “work, work, work, work, work” — allowing him to build his savings and his reputation as a dedicated employee. Years later, after an ill-fated 18 months at another restaurant, Blanton got a second chance from a former boss to return to KFC. And through it all, a loyal mentor who he met as a teenager and reconnected with as an adult, has encouraged him to strive for more.

“KFC really has been a support system for me,” said Blanton, who now works as a senior group lead for the KFC U.S. helpdesk. “When I first started as a cook and didn’t really have a stable home life, KFC gave me guidance, and now, I have my own family and am able to come to work and bring my passions to the team.”

Next year, the impact of that support system will culminate in Blanton receiving his bachelor’s degree from the University of Louisville. But even as he’s still working toward that achievement, Blanton has embraced his own mission to give back as one of KFC’s most enthusiastic supporters of Blessing in a Backpack.

Founded in Louisville 14 years ago, Blessings in a Backpack is now a national charity that provides children who receive free and reduced price lunch at school with food to take home on the weekends. When KFC U.S. began its partnership with the charity, Blanton jumped at the opportunity to lead his team’s efforts. For him, it was personal.

“In middle school, I started getting made fun of for free lunches,” Blanton said. “Kids started picking on me, and I would get too embarrassed to eat a lot of time. So, I would just skip lunch.”

“I was one of those kids,” he said. Now, he’s helping them. One of his first missions as the leader of the helpdesk’s efforts to collect food for Blessings in a Backpack was to bring in peanut butter to send home with kids for spring break — something “a little more substantial” to last the whole week, Blanton said. When it was time to deliver the jars, Blanton’s team had collected nearly 600 of them, almost twice the company-wide goal of 300, ensuring that every kid in the school received a jar in the spring and again that summer.

Going above and beyond is becoming a habit for Blanton. After getting to know the teachers at J.B. Atkinson Elementary, the Louisville school that receives the bulk of KFC’s donations, members of Blanton’s team renovated the teachers’ lounge, providing new furniture and new flooring. In May, they threw a party for Teacher Appreciation Week, complete with an appearance by Colonel Sanders himself.

Under Blanton’s leadership, the helpdesk team, which provides technical and business support to restaurant managers and includes 68 people, has emerged as KFC’s most eager partner with Blessings in a Backpack. Blanton credits support from his supervisor Brian Sanders for allowing him to embrace the mission.

“Feeding these kids is important to anybody, right? No one wants children to go hungry,” Sanders said. “But to Matt, it’s personal, so our team is equally dedicated to the cause.”

It’s not just support that Sanders has provided. During every food donation campaign, Sanders has matched donations from the helpdesk team members. “He’s really stepped up,” Blanton said.

“I know Matt skipped college in his 20s because he was making good money at KFC,” Gosser said. “But I’m a self-proclaimed degree pusher! I mean, when KFC and Yum! reimburse $5,250 of your annual tuition, it’s a no-brainer to get your degree while working here.”

At first, Blanton resisted Gosser’s motivation because he wondered how he’d juggle classes, being a good father and husband, and his new role, but thanks to Gosser’s persistence and a program at the University of Louisville geared toward mid-career students, he began his path toward a degree.

In his first semester, he wrote papers reflecting of his nearly two decades in the restaurant industry, earning 48 credit hours in the process. Next spring, he’ll receive his B.S. in Organizational Leadership, which he plans to use to springboard his career at KFC.

The support system provided by his KFC and Yum! family has made all of this possible, Blanton says. “Having people rally around you, you don’t get those experiences just anywhere,” he said. “That’s one of the things that I’ve learned, that KFC and Yum!, they truly are your family.”

Family, he said, isn’t just about DNA. That’s a lesson he hopes to impart on students he’s helping through Blessings in a Backpack. Whether it’s their teachers, the KFC and Yum! employees collecting food for them or the guy in the Colonel Sanders costume, Blanton wants them to have adults showing them what their lives could be like. After all, it worked for him.

Cheryl VanAllen and Ashely Hunter packing backpacks for Blessings in a Backpack.