Back To Home
Featured, Local Stories, Stories from the Field May 11, 2022 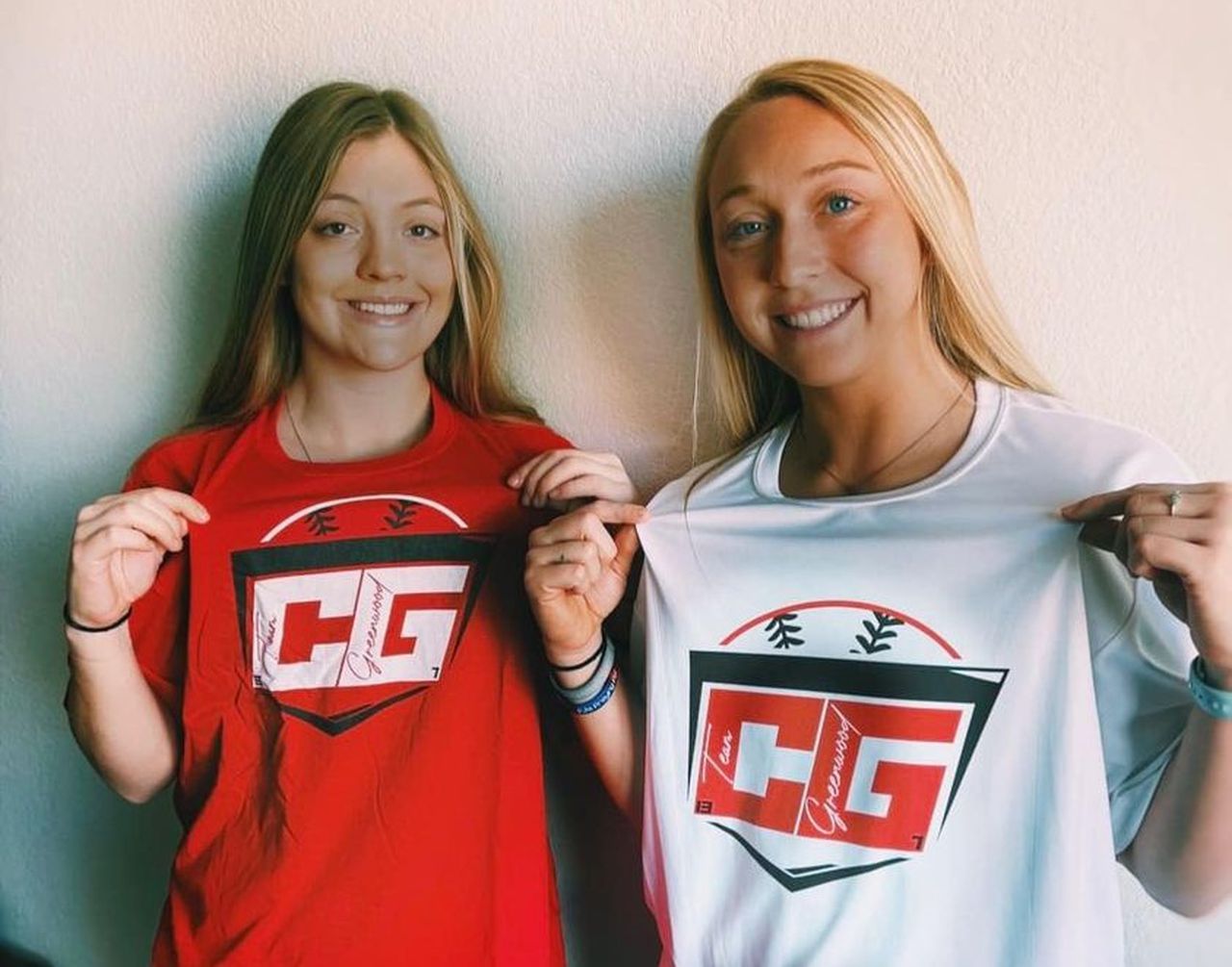 Story by Michelle Matthews via al.com

From the time Carmyn Greenwood was big enough to hold a bat, she was hitting balls off the T all the way to the fence. Her 22-months-younger sister, Cassady, followed in her footsteps.

“Our dad always got us involved in sports,” says Cassady – including volleyball, soccer, basketball and softball at Oak Mountain High School in their native Birmingham. “Softball was the one we stuck with.”

“They made a name for themselves all the way through,” says their mother, Amy Greenwood of Sylacauga.

The sisters played together from the time Cassady was in eighth grade until Carmyn graduated and was recruited to play at Auburn University. Now they’re reunited as players on the women’s softball team at the University of Louisville.

Their father, Ryan Greenwood – who played baseball in college and worked as director of internet operations with “The Rick & Bubba Show” in Birmingham for 15 years before moving to Louisville to be closer to his daughters – has forged a new career through their passion for softball.

“At one point, I said I wasn’t going to coach,” he says, “but then I started helping with youth leagues and moved into travel.” He ended up coaching softball for two decades and now works as the program director for Fusion Softball, a travel program in southern Indiana.

He’s also head coach, with Carmyn as an assistant coach, of the Fusion 18U National Greenwood/Unruh team, which competes on a national level. With years of coaching on the national scene, and as the father of college-level softball players, he has the experience to be able to evaluate and identify potential collegiate players.

And through his side business, Frenzy Designs, he has helped his girls give back to the Louisville, Kentucky, community through sales of their merchandise with the Team Greenwood logo he designed.

Blessings in a Backpack Mission Ambassador Carmyn Greenwood is one of the best hitters in the ACC. She led the Cardinals in 2021 with a .430 batting average. (Photo courtesy Ryan Greenwood)

This is their final season to play together at Louisville – an unexpected three-year bonus after Carmyn transferred there following a shoulder injury at Auburn, where she started her college softball career. With the surgery, she had 11 anchors placed in her shoulder, her mom says, coming close to the 13 anchors former New Orleans quarterback Drew Brees had in his. After the COVID-19 pandemic shortened the season, she received an extra year of eligibility – giving her time to play on the Louisville team along with her sister Cassady, now a senior.

The sisters wanted to do something special for this last season. After the NCAA created the NIL policy for student-athletes last fall, they can now be compensated for using their name, image and likeness in marketing and promotional endeavors.

“They’re not big self-promoters,” says Ryan. “We talked about it and thought, ‘What if the proceeds went to charity?’”

They decided to donate the profits from sales of their merchandise – coffee mugs, short- and long-sleeved T-shirts, hoodies and even a onesie for babies – to Blessings in a Backpack, an organization they’ve worked with for a long time.

Each Friday during the school year, Blessings in a Backpack sends home a weekend’s worth of meals with area children who might not otherwise have anything to eat.

“Prior to COVID, I was doing it every Friday,” says Cassady, who would arrange her class schedule so she wouldn’t miss her chance to work with the nonprofit. “You start to get to know some of the kids.”

Their mom, Amy, says that both sisters are “super special” people. Cassady is a “free spirit,” she says, who hugs everyone she meets, and Carmyn “will grab your hand and make you pray before you eat.”

Though Ryan and Amy are divorced, the family remains tightly knit. “A divorced family can work out, but you have to have parents who work together,” Amy says.

Their older daughter, Caylor Sheppard (yes, they all grew up with the initials CG that are featured on Team Greenwood merchandise), lives with her husband in Gallatin, Tennessee. Their two young sons, one who’s 4 and one who’s 6 months old, have become unofficial mascots for the team.

“They’re so cute,” Carmyn says. “The whole team loves them.”

Known as one of the best hitters in the ACC, having led the Cardinals in 2021 with a .430 batting average, Carmyn says her favorite part of playing softball is the camaraderie. “I enjoy getting to meet teammates every year and developing relationships and friendships for a lifetime,” she says.

The team “becomes your family here,” says Cassady, who knew no one when she started at the University of Louisville. A catcher, she says she enjoys the competitive aspect of softball. “On days when I’m struggling, it gets me through the day,” she says. “I have passion for it.”

They live next door to each other in the same apartment complex and “have to create separation” when they’re not playing together. “When it comes to softball, we’re each other’s biggest fans,” says Cassady. “I see us as really good teammates to one another.”

Cassady, who led Louisville in 2020 with a .386 batting average and still has one year of eligibility because of COVID, will graduate this month with a degree in psychology. She and her “foster fail” dog, a pit mix named Alma, will spend the summer in Birmingham, where she will work at the Cahaba Beach Dog Park. She plans to earn a master’s in social work.

Carmyn already has a degree in business management. She has a job lined up working at Bush-Keller Sporting Goods, which is owned by the same family that owns the Fusion Softball organization where she coaches. “I like the way that family runs their companies,” she says.

Even though the whole family feels sad about it being the sisters’ last season on the same team, Ryan says Carmyn and Cassady are “focused on being appreciative of so many opportunities,” he says. “The places we’ve gotten to go as a family, like Colorado and California – when you reflect on those, you start to understand it’s more about the journey. We’re thankful.”