Back To Home
Bills Mafia, Stories from the Field January 17, 2021 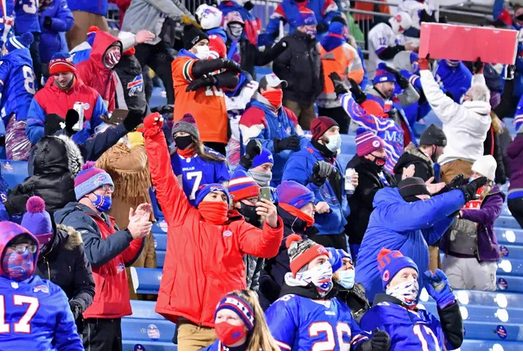 The Buffalo Bills gained a herd of new supporters in the wake of Saturday’s AFC playoff victory for the way their fans rallied around injured Baltimore Ravens quarterback Lamar Jackson.

Jackson left the game with a concussion in the second half of the 17-3 loss to the Bills. After the game, Buffalo fans on a Reddit message board began a push for donations to Jackson’s favorite charity — a child-hunger organization based in Louisville, Kentucky, where the 2016 Heisman Trophy winner starred at the University of Louisville.

In roughly 14 hours after the game ended, Blessings in a Backpack received 5,500 individual donations from Bills fans totaling nearly $150,000, according to chief marketing officer Nikki Grizzle, who got her latest update around 1 p.m. ET.

“Can we talk about the Bills Mafia? This is amazing,” Grizzle told USA TODAY Sports after waking up to a flood of unexpected new donations. “You took a normal Sunday in January and turned it into one of the greatest days in Blessings history.”

The charity — which provides food on the weekends for elementary school children who might otherwise go hungry — has been working with Jackson for about three years, but this surge in donations came completely out of the blue.

“This amount of money is going to make a huge impact on our organization, especially in a time right now during this pandemic where there’s more children now than ever that need our program,” Grizzle said.

The donations are especially welcome because the post-holiday period is traditionally one of the slowest of the year for non-profit organizations.

Although it’s based in Louisville, Blessings in a Backpack has other chapters across the country. Grizzle said the organization can feed a child for an entire school year for $130, so at least 1,150 children will be directly impacted by Bills fans’ donations.

“I personally have been learning how fabulous Bills fans are,” she gushed. “I had no idea!”

This isn’t the first time the Bills Mafia has donated money to an opponent’s favorite charity. On the final day of the 2017 regular season, quarterback Andy Dalton — then with the Cincinnati Bengals — threw a 48-yard touchdown pass in the final minute to beat the Ravens and clinch Buffalo’s first playoff berth in 17 years.

Bills fans were so grateful that they donated more than $415,000 for the Andy and Jordan Dalton Foundation for seriously ill children. Eight months later when Dalton and the Bengals came to Buffalo for a preseason game, fans gave him a standing ovation when he took the field.

“This is the ultimate example of sportsmanship,” Grizzle said. “They are giving back to someone that they competed against. How many times can we say that right now?