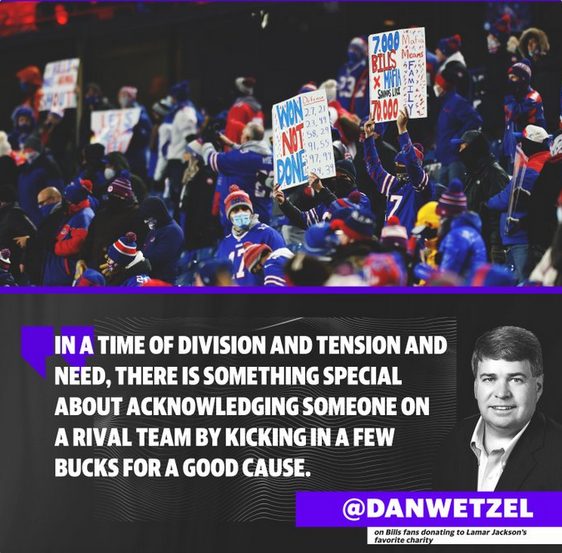 On the last play in the third quarter of Saturday’s Baltimore-Buffalo playoff game, Ravens quarterback Lamar Jackson was knocked to the ground and slammed his head on the turf.

He spent the rest of the game in concussion protocol.

Watching from his home in Tonawanda, New York, Bills fan William Burke felt uneasy. There was no question that, competitively speaking, having Jackson out of the game was a good thing for his team. Buffalo would, indeed, advance to Sunday’s AFC championship game against Kansas City.

Still, no one wants to win that way.

Burke, 23, decided to do something about it. Along with fellow Bills fan Dan Konopski, they jointly posted on social media that maybe Buffalo fans could donate $8 (Jackson’s jersey number) to the charity that the 2019 NFL MVP works with, Blessings in a Backpack.

The Louisville, Kentucky-based organization serves school kids who receive government-funded lunch by providing them food to carry them through the weekend. Jackson, a South Florida native, became associated with it after winning the 2016 Heisman Trophy at the University of Louisville.

Burke sent out the idea on Twitter. Konopski posted to a Bills-centric Reddit feed. The goal was small. They figured a few people would see it. They had read that Blessings in a Backpack can feed a single child for an entire school year for just $130. Maybe Bills fans could feed a couple of kids.

Nikki Grizzle is the chief marketing officer for Blessings in a Backpack. She had no idea what a couple of Bills fans were up to until the man who monitors the charity’s website sent out a staff-wide text on Sunday morning.

“We get a notification every time someone donates,” Grizzle said. “And when there are suddenly 400 donations on a Sunday morning in the middle of January, he said, ‘Did anybody know this was happening and forget to tell me?’ ”

Grizzle and her coworkers went online to see for themselves as the donations from Buffalo flew in.

By noon on Wednesday, some 16,450 individual donations in Jackson’s honor had been made. The total amount given is now over $458,000. And counting.

The amount was so overwhelming that the charity decided to expand the program beyond Louisville, adding kids in Baltimore, Buffalo and beyond.

The guys who started it can hardly believe it, although maybe they should have.

Bills fans have recently embraced a philanthropic bent. In 2017, they donated to the charity of then Cincinnati quarterback Andy Dalton to thank him for winning a game that helped the Bills reach the playoffs. Then earlier this season, they raised $1 million for a local children’s hospital in the name of the grandmother of Bills QB Josh Allen. Many of those donations were for $17, Allen’s jersey number.

“It’s Buffalo,” Burke said. “We are the city of good neighbors. When we see something happen that we don’t think is right, we make it right.”

Still, this was such a spur of the moment idea, as much about appreciating an opposing player as anything else.

Jackson is an electrifying star but also someone who comes across as a likable, genuine person. He has thanked Bills fans on social media. The charity says he’s overwhelmed at the gesture.

“This is what we do,” Burke said of Bills fans. “It’s not going to be the last one. I may not be the one to start the next one, but there will be a next one.”

The hope is maybe this concept expands to other fan bases, even other sports. In a time of division and tension and need, there is something special about acknowledging someone on a rival team by kicking in a few bucks for a good cause.

A little appreciation can go a long, long way.

“All I know is that two guys watching football on their couch in Buffalo changed the fortunes of a children’s charity,” Grizzle said. “It’s what the world needs right now.”

“We are the city of good neighbors."