Back To Home
Blessings in the News November 2, 2017 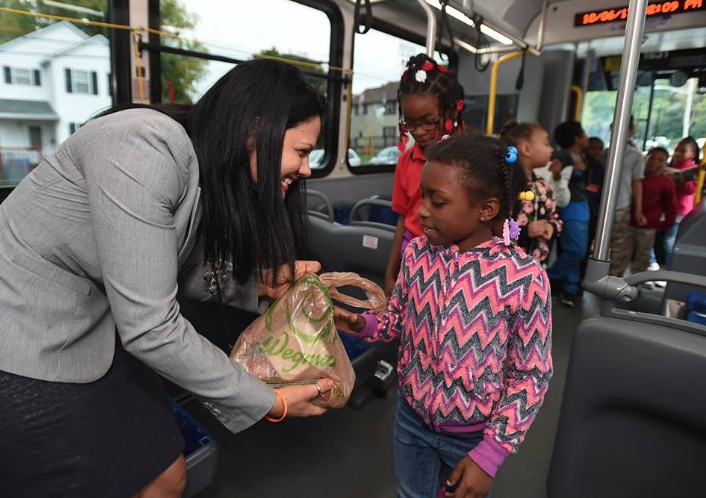 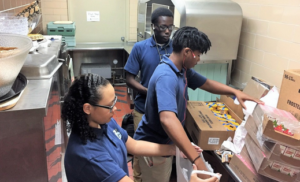 More than 400 Syracuse city school students who depend on free school meals during the week are getting bags of food to take home on Fridays so they won’t go hungry over the weekend.

Syracuse has joined a growing number of school districts nationwide that are combating childhood hunger by feeding students seven days a week.

The Syracuse City School District is distributing the food through Blessings in a Backpack, a national nonprofit group dedicated to providing food to low-income elementary school kids to tide them over on weekends. It serves 96,000 students in 47 states and Washington, D.C.

“It (childhood hunger) is in the crevices of every community and we are trying to shine a light on it,” said Trisha Ewald, Northeast program manager for Blessings in a Backpack.

Half of city’s children live poverty

That organization began in Kentucky in 2005 when a teacher noticed children who received free or reduced-price lunches in school coming to school Monday morning hungry and tired.

Recent U.S. Census data shows about half of Syracuse children live in poverty and the city is the nation’s 29th poorest.

The district coordinates the effort with help from community groups, but does not pay for the food. Blessings in a Backpack depends on donations of money and non-perishable food items from businesses, organizations and individuals. It costs $100 to feed one child on the weekends for one 38-week school year.

Here’s what each child typically gets: two entrees like small cans of beef ravioli or soup; two breakfast items like cereal packs and two snacks like granola bars.

Some kids don’t know where to get next meal

“A lot of people only see hunger on TV in third world countries, but I see it all the time,” said Rachel Murphy, the district’s director of food and nutrition services. “Some children don’t know where their next meal is coming from.”

The district serves about 24,000 meals a day when school is in session. About 80 percent of city school students are classified as “economically disadvantaged,” which means they qualify for free or reduced-price school meals. Because the poverty rate is so high, federal rules allow the district to provide free meals to all students, regardless of family income levels.

The district also runs a summer feeding program at 49 locations in the city for children under 18. 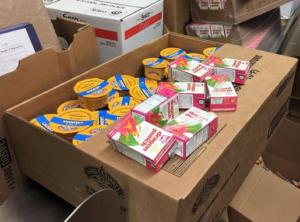 If they don’t eat in school or a summer feeding program, many children don’t get fed, Murphy said.
Containers of juice and cheese dip waiting to be packed at Bishop Grimes High School for students at Franklin Elementary School in Syracuse.

The district launched the Blessings in a Backpack program last year at Delaware Elementary on the city’s Near West Side. The number of participating Delaware students has gradually increased from 50 to 100.

Murphy said the impetus to start the program here came from community organizations like Bellevue United Methodist Church in Syracuse that contacted the district and expressed interest in helping needy students, Murphy said.

Community organizations that have “adopted” participating schools order the food, pack it in bags on Thursdays and deliver them to the schools. Those organizations include Bellevue United Methodist Church which works with Delaware; St. Paul’s Church, Seymour; Bishop Grimes High School, Franklin; and Centro, Dr. King.

The number of children who get bags is determined by the amount of donations. About $75,000 has been raised so far in the Syracuse area. Organizations also help by conducting non-perishable food drives. Murphy said the district wants to provide the weekly bags to more students and expand the program to other elementary schools.

Hoarding food in lockers to eat at home

Because there are not enough bags for every child in each of the participating schools, school social workers like Pedro Abreu at Seymour talk to teachers to determine which students should get the food, then contact parents for their consent.

“Teachers have a good sense of the needs of the kids,” he said. “They know who comes in during the winter without a coat.”

Some kids come to school hungry, and others hoard food from the cafeteria in their lockers so they will have something to eat when they get home, according to Abreu.

“If they are hungry or worrying about if they will be able to eat later in the day, how can they pay attention to math?” Abreu said.

Murphy said all 642 students at Dr. King need the extra food, but there will only be 50 bags available. So King will give the food to 50 different children every week.

To kick off the program at King, Centro plans to bring a bus filled with enough bags for every student in the school on Oct. 6.